As a multi-instrumentalist Aryeh performs professionally on a wide range of stringed instruments both familiar and rare. He is a classically trained violinist which he started at the age of three. Since 1994, his focal instrument was the Celtic folk harp. Beginning in 2008 the Swedish nyckelharpa (or keyed fiddle) became his primary instrument. He is also adept on viola, cello​​, cittern, guitar and more. 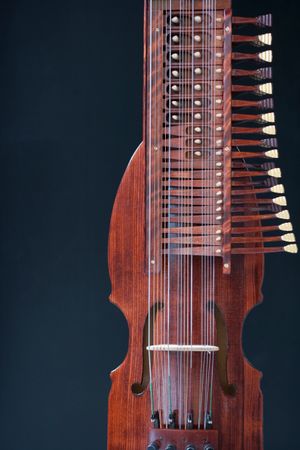 The Swedish nyckelharpa is an uncommon instrument that dates back to at least the mid-14th Century in Sweden although it probably has a much earlier history. Some evidence suggests its emergence in Europe as early as the mid 9th Century. Still unusual in the US it is rising in popularity around the world but has been prevalent in the folk music of Sweden for hundreds of years - the only country where it enjoyed a living tradition since its emergence in Europe.

Like a violin, it is played with a bow; but unlike a violin it is held more like a guitar or mandolin across the players waist or stomach with a strap or on their lap rather than under the chin.

There are 3 rows of keys. Each key has a wooden peg or dowel called a tangent inserted into it. When a key is tapped, the tangent moves and hits a string thereby producing a specific note (much like putting a finger on a violin or fretting a guitar, the string is shortened by the tangent/key).

Nyckelharpas also have 12 sympathetic strings which are not bowed, but rather, resonate sympathetically. This gives the nuckelharpa a distinctive ethereal and other-worldly sound.

Most makers and dealers can be found in Sweden, Germany and France and there are several in the U.S. as well.

To learn more about this instrument visit: nyckelharpa.org.

The Celtic harp (Irish harp, folk harp, lever harp or Clàrsach), is an ancient instrument whose history dates back to at least 500. 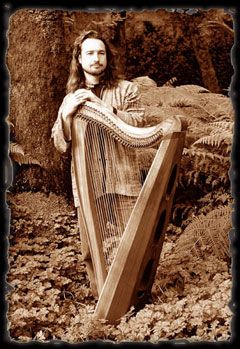 B.C.. The national instrument of Ireland it was originally strung with wire and flourished from the 10th - 18th centuries, but fell into disuse by the early 19th Century. Eventually strung with nylon or gut, there has been resurgent interest since the mid 20th Century and a new Celtic harp tradition now flourishes.

The ancestor to the larger orchestral harp, the Celtic harp differs not only in size, but also because it does not have pedals (which allow a player to quickly modulate keys during a piece). Instead one uses manual levers to change the pitch of a string (and thereby modulate to different keys, or obtain accidentals).

The folk harp's open box and earthy resonance, however, is often found to be a more pleasing and beguiling than the gilded and complex mechanical construction of the pedal harp.

There are countless websites about the Celtic harp but one good resources to start is: www.harpcenter.com.

The Cittern is a stringed instrument originating from the Renaissance 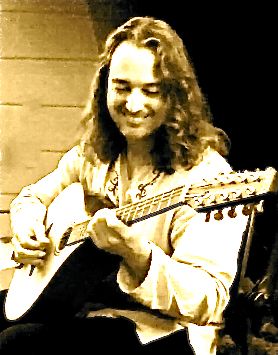 period, and is often categorized in the mandolin family.

It is a ten-string version of the 8 string octave mandolin or what is sometimes referred to as the Irish bouzouki. The extra course of strings allows for more tuning options though many Cittern players generally use open tuning, which gives this beautiful acoustic instrument a very full and rich tonal quality.

The instrument has been gaining in popularity and can be heard in both many folk music genres from Celtic, Nordic-Scandinavian, Baltic and more.